Skip to content
Home > News & Events > How to promote at the European level the swift integration of young third country nationals through cluster networks? This was the topic discussed during the last International Capacity Building Workshop of the LIME project!

How to promote at the European level the swift integration of young third country nationals through cluster networks? This was the topic discussed during the last International Capacity Building Workshop of the LIME project!

On the 9th of June from 9h30 to 12h30 CEST, the LIME project held its 4th and International Capacity Building Workshop. The aim of this online event was to discuss the following topic “Migrants’ Labour inclusion: Networks, Cluster Activation and Consolidation” at the European level. In order to do so, we welcomed various speakers from Italy, Spain, France and Belgium to talk about two main topics:

Dolinda Cavallo, Project Manager of the LIME project at ALDA – European Association for Local Democracy, moderated the event, making it participatory and alive through several interactive times to get to know each other and to collect the opinion and experiences of the participants about migrants’ labour inclusion and how to create a start-up.

Afterwards, the aim was to present the MEIC – Migrants Economic Integration Cluster methodology implemented in these two pilot projects and set up within the scope of the LIME project. Since half of the participants replied they were not familiar with the concept of cluster and more particularly the “cluster network”, Folco Cimagalli, Full Professor of Sociology of Migrations at LUMSA University presented this paramount notion to promote the swift integration of migrants into the labour market. The presentation focused especially on how the pilot actions in Rome and Madrid implemented this concept and have established sustainable clusters of private and public stakeholders.

Then Rossana Cerbone from Confcooperative Roma introduced her presentation about “Self-entrepreneurship and social enterprise”, by explaining the methodology and the training path developed by their association. During the pilot action in Rome, Confcooperative Roma identified two main start-ups that could be developed: a pastry shop and a cooperative; and helped them to create business plans and to implement their projects. Confcooperative also presented their leaflet designed for every young third country nationals, with the aim to explain in a simple way the reasons why migrants should start their own businesses, and more particularly cooperative.

One of the main tools to make the migrants able to create their own start-ups is access to funding; which was then the topic addressed by David Taquin, from MicroStart. He thus introduced the work and missions of MicroStart to help migrant people to create their business and have access to funding. He shined a light on the fact that immigration is a key to boost the GDP and the whole economy; for instance in Belgium and according to the national bank, immigration has boosted the GDP by 3,5%. However, the barriers to become self-employed are still high: cultural differences, language challenges, and again, the access to funding. Therefore, MicroStart works to overcome these obstacles through the implementation of support tools, individual coaching sessions, interest-free microcredits, etc. In order to do so, Microstart has developed partnerships with several public and private stakeholders; which again highlights the importance of networks.

The second part of the event then focused on the other main topic of our workshop: “Vocational Training & Migrants labour inclusion into the labour market”. Ivan Toscano, from Cnos Fap, addressed the need to endorse a comprehensive multi-sectoral approach, and emphasised the potential of VET to foster third country nationals integration.

Following on from his presentation, we welcomed Margherita Valori from CIES Onlus who shared with us their good labour insertion methodologies. She insisted on how important it is to use a narrative and biographical approach when it comes to migrants’ labour inclusion: she indeed highlighted the importance to emphasise and recognise the studies of the migrants, and capitalise on the capacities of the participants. Furthermore, in order to guarantee the effectiveness of their interventions, several things are needed, such as monitoring actions, direct assistance actions, preventive actions, tutoring, and individual coaching, etc.

Then we moved to Spain, with the insightful presentation of Berta Ruisanchez from the Spanish association Pinardi. Berta Ruisanchez addressed the role of enterprises in improving the migrants’ labour inclusion, and how companies and NGOs should work hand in hand. She presented the toolkit developed by the association in order to raise awareness among enterprises about migrant workers, and to fight stereotypes that often appear as major obstacles to their good integration.

From Spain to France, we met Chloé Schmitt from Kodiko and discovered their “refugee-employee” co-training programme in companies. While presenting their approach, she also emphasised the importance of raising awareness among enterprises and providing them training about stereotypes, cultural differences, etc, and to link their actions with the concept of corporate sustainability and responsibility. The work of Kodiko relies on strong partnerships with enterprises, institutional actors and other NGOs; which was a perfect example of a cluster network.

To conclude the workshop, Cristiana Di pietro from LUMSA University introduced the EU recommendation paper they will draft, and reminded us how these types of  workshops and shared moments are paramount to better understand how the model of cluster network can be improved and thus better used in the future to promote the swift integration of third countries nationals into the labour market.

The LIME project partners were delighted to meet you and would like to thank you and invite you to our next event: the Final Conference of the project that will be held on the 21st of June from 10h to 12h CEST. You can already register here! 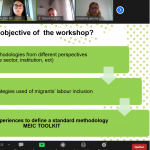 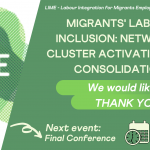