The LIME Project and the Migrant Economic Integration Cluster

The two-year project aims to promote the social and labour integration of young people from third countries (ages 18-29) in the labour market in Italy and Spain in particular in the cities of #Roma and #Madrid through the application of the innovative methodology “Migrants’ Economic Integration Cluster- MEIC” based on the creation of a multi-stakeholder partnership that includes public and private actors.

The Cluster will be engaged in the definition and implementation of a long-term strategy dedicated to the strengthening of existing labour market integration policies and tools in the territories of reference, adapting them to the needs of the project target, young migrants.

During the event, the manifesto will be signed, through which the actors involved in the Cluster group of the territory of Rome will commit themselves to implement synergistic actions aimed at promoting the social and economic inclusion of migrants.

Will attend the event:

Cies Onlus and Università Lumsa – Presentation of the Manifesto 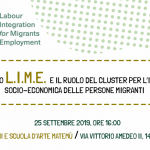 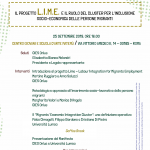